Gateway GWTN156-3BK review: A gaming laptop that lives a bit too loud 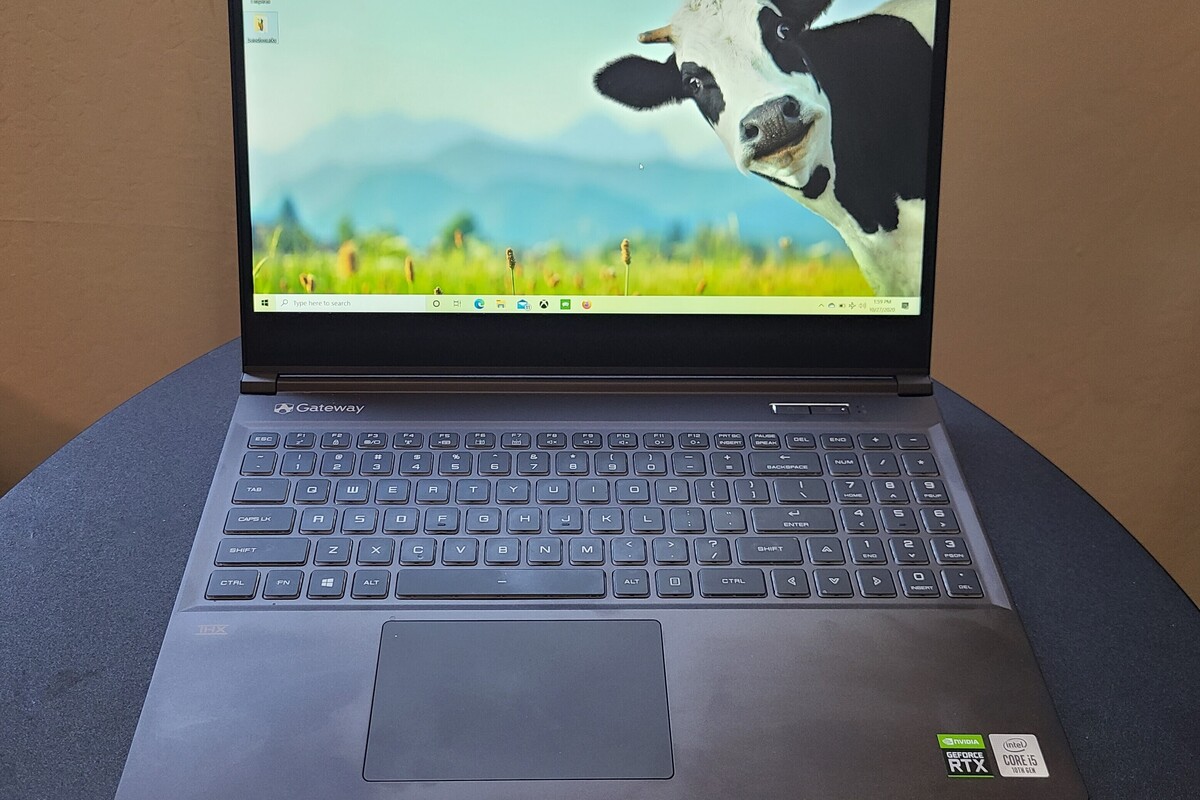 Gateway’s back! This once-famous PC company from the 1990s was purchased by Acer some years ago. It sat idle until Acer resuscitated the Gateway brand earlier this year, complete with spotted-cow mascot, as a Walmart exclusive. One of the first new offerings, the poetically named Gateway GWTN156-3BK, builds a Comet Lake-H mobile CPU and a modestly aggressive Nvidia GeForce RTX 2060 chip into a laptop costing just $999 at Walmart.

Does it deliver? Absolutely. While both the available memory and SSD are sparser than we’d like, our tests revealed satisfactory to very good gaming performance. The design has its highlights too, including a decent keyboard and a good mix of connectivity options.

This review is part of our ongoing roundup of the best laptops. Go there for information on competing products and how we tested them.

In a year when everyone needs a laptop to work or study from home, even a vintage PC brand like Gateway can get some traction—we saw this laptop move in and out of availability during our review period. (There is also a version with a Ryzen 5 4600H and a GeForce GTX 1650 for $799Remove non-product link.)  There’s no relationship to Walmart’s own Motile house brand, of which we reviewed the surprisingly good Motile M142 budget laptop (currently out of stock).

With most premier gaming laptops priced at several thousand dollars, the question we want to answer is where Gateway (or Acer) cut corners to bring this gaming laptop down to its $1,000 price point. There are no variations on memory or SSD size, for instance, though the amounts you get are adequate. Here are the primary specs:

The external design is plain, with a charcoal plastic shell and the classic Gateway spotted-cow badge adorning the lid. The quirkiness of the brand—there’s another cow peering quizzically at you from the laptop’s desktop background—is somewhat at odds with the gamer aesthetic, especially with the cow gazing down at the RGB-lit keyboard.

What does scream “gamer” are the aggressive ventilation openings to the sides, bottom and rear. The fans scream too, unfortunately—almost always whining gently in the background, even when manually set to the low fan mode in the Control Center utility. It was often loud enough to annoy me until I donned headphones.

Related, to the left of the power button above the keyboard there’s a secondary button with three modes: Office, Gaming, and Turbo. For the life of me I couldn’t understand why Gateway had included it, as our performance testing revealed that the modes did absolutely nothing that our tests could discern. Once the fan dropped down into “low” and shut off in Office mode, I finally grokked why the toggle was useful.

The port layout is plentiful and yet frustrating. USB Type-A ports adorn both sides of the laptop, supporting an external keyboard and mouse if you so wish. A dropjaw version of the ethernet connector provides both high bandwidth and reduced ping times. There’s a single HDMI port and two miniDisplayPort connectors, perfect for my existing miniDP-to-HDMI cables. There’s even an increasingly rare SD card slot.

Those display expansion ports play into the laptop’s ability to game on the go—either to plug into a friend’s external display, or use your own. The Gateway’s 120Hz display is a little slower than some of the 144Hz or higher displays you’ll see on pricier gaming laptops, but it’s still an eye-pleasing refresh rate and a solid effort for a budget model.

Keep in mind, though, that this is a 1080p display spread out over a 15.6-inch screen. The resolution doesn’t look as crisp at this size, and the display can look a little washed-out, too.

The biggest port frustration is the single USB-C, because it’s not Thunderbolt-compatible. That means you can’t take advantage of the latest display and storage devices using that fast connection. Gateway also positions the barrel-charger 180W power port at the rear of the laptop, too, and it tends to become snagged when you put the laptop down.

Keyboard: Good for gaming and work

The Gateway GWTN156-3BK’s keyboard is decent, with individual keys measuring about 1.5cm wide—average for most laptops we’ve seen, except for the pricier Microsoft Surface notebooks. Each key is a bit stiff, with a definite “bottom” to the travel, which wears on your fingertips after a bit. As I usually do, however, I wrote this review on the GWTN156-3BK’s keyboard, and it wasn’t half bad. As far as the keyboard is concerned, this is a laptop that you can work and play on.

It wouldn’t be a gaming laptop without bling. Each key has four gradations of backlighting, more than a typical productivity laptop, plus the “off” setting. The well-designed Gateway Control Center app (more on this later) allows you to select from a number of different colors, or randomly cycle through what appears to be 28 different color options. The RGB party may not be as lively as what Alienware, Razer, or other gaming peripherals offer, as the color changes cycle through the keyboard keys as a whole, rather than via individual keys or zones. Still, there’s at least some reminder that you can have some fun with this laptop.

The Gateway GWTN156-3BK includes a large, plasticky trackpad. The responsiveness seemed adequate, though scrolling up and down through a webpage seemed a little uneven. The trackpad isn’t quite clickable all the way to the top. There are no secondary buttons, either.

Multimedia: Use headphones, and buy a webcam

Gateway takes advantage of the laptop’s broad keyboard base by seemingly positioning the downward-facing speakers right at the front two edges of the laptop, so that the sound seems to be forced out of either side. This provides some nice audio separation, and helps positionally orient sounds—from another player, say, or a vehicle—in games that support this option. The speakers sounded flat and somewhat nasal at the low end, but with sufficient volume.

The Realtek Audio Console app, which Gateway includes with the GWTN156-3BK, helps in two ways. First, the app’s Omni Speaker settings improve the speaker response from “flat” to something more well-rounded. Realtek’s included equalizer also allows you to tune whatever audio you’re playing. Unfortunately, of course, you’ll have to go into the app itself and perform the necessary changes.

The Gateway GWTN156-3BK features THX enhancement, which is advertised on the laptop’s chassis itself. For some reason the laptop also includes a second THX Spatial Audio for PCs audio app, complete with equalizer. Yet the app doesn’t appear to do much of anything, if at all, because tweaking the audio settings produced no discernible effect.

Well, at least with the physical speakers themselves. We’ve written time and again about how laptop speakers pale compared to the audio experience headphones deliver, and the THX audio enhancement kicks in when headphones are plugged in. Everything improves substantially with the THX enhancements enabled, complete with bass boost, the equalizer, dialogue enhancement, and volume leveling. Two gaming settings—“grand” and “hyperlocator”—appear to be for those who prefer specific positional audio, or those who don’t mind a more general audio soundscape.

As for the webcam… well, it exists. As a 720p camera buried at the very bottom of the display’s “chin,” it will prove that someone is sitting at the keyboard, even if you’ll have to push the display far back so that it can see your face. Buy a cheap webcam instead.

Gateway’s GWTN156-3BK doesn’t ship with much bloatware, aside from the multiple (Realtek and THX) audio apps as well as the Firefox browser and an odd addition, Forge of Empires. I’m not sure why the included “Command Center” app hides within a folder within the Start menu, and why Gateway didn’t add it to the Start tiles. Still, Control Center is a slick-looking app, with options to control the fan speed and available keyboard lighting.

When it comes to performance, the Gateway GWTN156-3BK has two specs that should give you pause. The first is the available memory: With just 8GB inside, you should consider upgrading the laptop to 16GB or beyond by opening up the chassis via the user-accessible screws. The problem is that Gateway slapped a “warranty seal” sticker on top of one of them, which means that you’ll have to argue, via a 2018 FTC advisory, that those types of warranty stickers don’t impact your rights.

Just as serious, albeit in a different way, is the limited 256GB of SSD storage. On a productivity laptop, this is no big deal; however, with games like Red Dead Redemption 2, Microsoft’s latest Flight Simulator, and Call of Duty: Modern Warfare’s Warzone all pushing 100GB of data by themselves, your internal storage options will be limited. Call of Duty: Black Ops Cold War will take 175GB to 250GB of storage by itself, which likely means it wouldn’t fit on the drive at all.

I liked the concept of the Gateway GWTN156-3BK serving as both a office PC as well as an after-hours gaming workstation, but it fell short in two ways. Even with the laptop set to Office mode, the fan frequently whined away in the background—there’s no silent mode for office work. I also wasn’t impressed with how the Gateway dropped frames on our 4K/60Hz YouTube test video; shouldn’t a gaming laptop be able to handle this?

Although this is a budget laptop, its fundamentals are advanced: a 10th-gen “Comet Lake” H-series CPU, plus the next-gen RTX 2060 GPU. The RTX 2060 is the lowest-end model of this generation, but even it takes advantage of two key features that the prior generation of GTX models don’t: real-time ray tracing, which visually enhances games by modelling the way light reflects and refracts off of various surfaces, and DLSS 2.0, which uses AI features found within the RTX 2060’s Tensor cores to deliver visual improvements such as anti-aliasing, without requiring their computational workload. Essentially, you’re getting a prettier game at faster framerates. (We have a fuller explanation of DLSS 2.0 as well as a look at what ray tracing in games like Minecraft can do for you.) There’s a fairly broad technological divide here, though: The vast majority of (older) games are coded without support for either technology.

Though we tested using both the Office and Turbo setting, the difference between the two was virtually nonexistent save for the HandBrake and Fire Strike Extreme tests. Even then, the differences were slight and did not affect the GWTN156-3BK’s ranking.

We took a brief look at productivity performance via the PCWork Creative benchmark, just to be sure that nothing prevented it from navigating through typical workloads like photo manipulation and video editing. For this test and this test only, we compared the GWTN156-3BK against some budget productivity notebooks. Clearly there’s no issue here, as it tops the heap.

Cinebench’s R15 release uses all of the CPU’s horsepower to render a two-dimensional scene. With a 4-core, 8-thread Comet Lake processor under the hood, the Gateway GWTN156-3BK doesn’t do that well. As we’ll see later on, however, performance increases under different workloads.