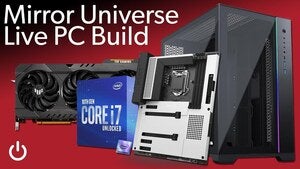 Again in December, we constructed a spectacular RGB PC utilizing Lian Li’s O11 Dynamic Mini and Unifans, together with a bunch of AMD elements. It appeared nice, and due to these modular Unifans, had a particularly clear look. Usually while you pack six RGB followers right into a case, you find yourself with a large number of cables to route.

Getting the elements wanted to copy that Lian Li x AMD PC is tough going in the mean time, although. And between that and one other intriguing set of modular followers in the marketplace—InWin’s Saturn line—we determined to do a mirror universe model of the construct. Inside will probably be a 10th-gen Core i7-10700Ok and a Z490 board, and we even discovered a case that’s a close to duplicate of the O11 Dynamic (not a Mini model, alas, however shut sufficient).

You may catch us placing all of it collectively on Wednesday, March 31st at 11am Pacific on our YouTube channel:

Like all journeys to an alternate universe, this construct is about up for stress and intrigue. Due to the elements accessible in our lab, we’ll be utilizing an NZXT Z490 motherboard…which, as , is a closed system for RGB. The Saturn followers, alternatively, work with open techniques tied to motherboard distributors like Asus, Gigabyte, MSI, and ASRock. So I can’t plug the followers into the NZXT mobo.

As a substitute, I’ll be playing to see if I can daisy chain the 2 RGB controllers that include the Saturn followers, then join them to the Phanteks case itself, which is suitable with the identical kinds of RGB techniques and has its personal RGB controls inbuilt. It’s a calculated threat, however one that may lead to zero rainbow lights if it fails to work as I’ve envisioned it. Want me luck.

As for the complete elements checklist, right here’s the whole lot we’ll be utilizing:

To maintain the construct shifting alongside quicker and depart extra time to troubleshoot any RGB cabling woes, some elements of the PC will already be assembled once we begin. You’ve all seen a CPU drop into its socket one million occasions anyway, proper?