Despite swift advances in healthcare, Universal Health Coverage (UHC) remains a distant dream for India. Affordability of health services is a major hurdle in accessing healthcare in the world’s second-most populous country despite several government programs working towards it. Nearly 55 million Indians were pushed into poverty in 2011-12 due to enormous healthcare costs, which they pay from their meagre savings or by borrowing money. The recently released first phase of the National Family Health Survey, round 5 (NFHS-5) revealed startling trends in out-of-pocket expenditure. The findings reflect the situation before COVID-19 hit and the numbers are likely to be worse now on the back of India’s worst public health emergency this century – the coronavirus pandemic. The Out-of-Pocket expenditure (OOPE) incurred by people while accessing public health services is on the rise. NFHS V data reveals that average out of pocket expenditure per delivery in a public health facility has risen in 10 states and two Union Territories. Amongst the states for which data was released in the first phase, the average OOPE for delivery in the public facility has increased by more than 10 percent in last five years (from NFHS- IV in 2015-16 to NFHS- V in 2019-20) in India. The steepest rise was of nearly 108 percent in Sikkim, where expenditure rose from Rs. 3,993 (NFHS-IV) to Rs. 8,334 (NFHS- V). The highest average Out of pocket expenditure was incurred in Manipur, which was Rs. 14,518. 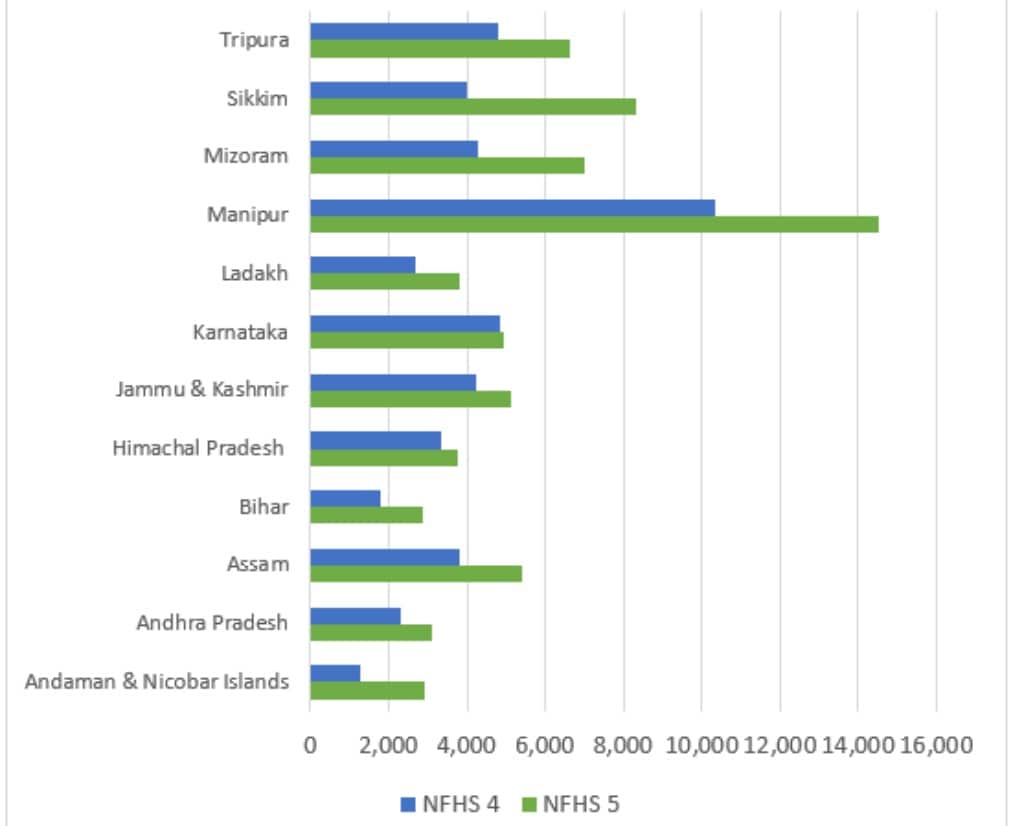 According to the National Health Account (NHA) 2016-17, out of pocket expenditure incurred by people was nearly 2.2 percent of GDP. This is higher than the Government of India’s own health spending, which amounts to 1.6 percent of GDP for 2020. Households shoulder the highest share of health expenditure in the country (63.2 percent in 2016-17). Consequently, OOPE is one of the biggest reason for people falling into poverty, leading to a vicious cycle of poor health outcomes and poverty. Moreover, the pandemic has highlighted the importance of good health outcomes – for not just an individual, but society at large.

The rising costs of healthcare are something the government recognizes and various schemes aimed at the poor and vulnerable exist.

Clearly these schemes appear to not be working as efficiently as expected.

The benefits under schemes like the JSSK and SUMAN need well-equipped public health infrastructure, where they can access health services under the scheme. However, as of March 2018, only seven percent of functioning Sub-Centres, 12 percent of Primary Health Centres and 13 percent of Community Health Centres met minimum Indian Public Health Standards (IPHS) norms. (They are a set of standards envisaged to improve quality of healthcare delivery.)

Proper equipment, infrastructure, and/or doctors are lacking when, for example, a pregnant woman visits a public health facility for delivery. Even if these basics are notionally available, she would still be forced to purchase other critical services like ultrasound, blood tests, etc. from nearby private health establishments. This makes it impossible for women to avail JSS benefits. Patients also end up buying medicines from private pharmacies, defeating the purpose of reducing OOPE through schemes like NHM Free Drug and Jan Aushadhi Schemes. Medicines constitute the majority share of OOPE in the country.

A swift supply chain should be ensured to safeguard the availability of medicines in public health facilities under NHM Free drug scheme. At the same time, awareness on availability and efficacy regarding generic medicines remains low. Additionally, multiple referrals often increase transportation cost for the patient manifold, if a government ambulance is not available.

Meanwhile, the beneficiary list of Ayushman Bharat- PMJAY is based on the data from Socio-Economic and Caste Census 2011, which is dated. As a result, thousands of people miss the opportunity to be supported by this health insurance scheme. The recent Parliamentary standing committee on COVID-19 outbreak has raised concerns on the scheme’s exclusion criteria, which caused many of those eligible from marginalised sections of the society were not able to get the benefit of Ayushman Bharat; they then had to pay out of their pocket for COVID-19 treatment. Moreover, even when covered by PMJAY, people may have to pay out of pocket due to unavailability of a facility in an empanelled hospital or the five lakh worth insurance cover was utilised during hospitalisation of some other member of the family. Therefore, increasing the insurance cover under PMJAY is also strongly argued.

Right to health: A constitutional guarantee?

Addressing increasing OOPE in public health settings need more rigorous policy formulation and implementation mechanisms. The government must ensure the availability of appropriate infrastructure to cater to India’s health needs. PHCs and CHCs must be adequately available across the country, including in rural, hilly and hard to reach areas. Besides, these public health facilities need to meet the IPHS norms to ensure the provision of quality healthcare. Mechanisms to strengthen the availability of free medicines at all public health facilities like swift supply chain, smoother digital system, and warehouse and transport management should be undertaken.

To ensure state and central governments are constitutionally obligated to provide healthcare, the time has come for India to legislate a ‘Right to Health’ ensure everyone can access healthcare without risking falling prey to poverty.

The author is a public health professional who works at Oxfam India as a consultant.