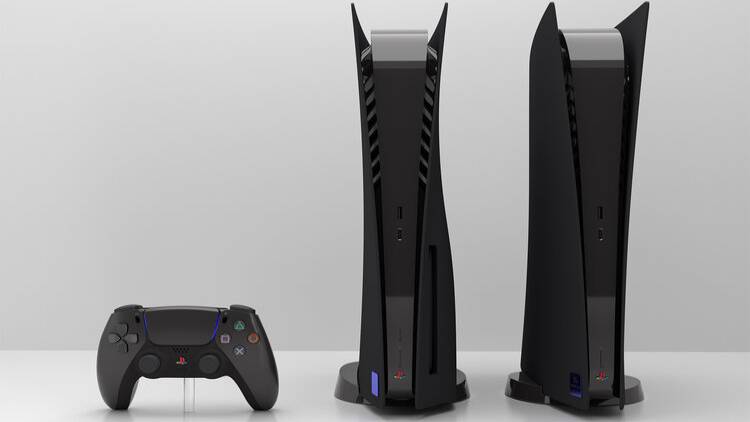 Update: The Black PS5 is now on sale, although the disc-based version of this special edition of the console now says “Check back soon” and we’re having issues trying to buy the Digital PS5 in black. The best you can do is keep trying and know that you’re not alone.

If you really want a black PS5, the PS2-themed custom console from SUP3R5 is available to order today (January 8).

SUP3R5 have announced that orders will open at 3pm EST / 12pm PT / 8pm BST today, so if you’re interested, you best set a reminder. The console does ship internationally, however, the custom console maker reserves the right to restrict shipping to various countries and regions.

The impressive retro-style makeover isn’t officially affiliated with Sony, as you might expect, and you can check it out here.

The custom console and accompanying DualSense controller are due to ship in late spring 2021, and the design reflects the look of the iconic PS2, which still remains the best-selling PlayStation console to date with 155 million units sold worldwide.

Production is also limited to just 304 units, so if you want one, you’ll need to be ready to order as soon as they open.

Why only 304 units? Well, it’s apparently a throwback to when the PS2 was originally released: 03/04/00. If you only want the DualSense controller, you should have a slightly better chance as there are 500 units up for grabs.

According to SUP3R5, a staggering 54K were already on the waitlist for the console nine hours ago, and it’s almost a given that the number will continue to rise as the black PS5 gets closer to being available. You’re going to need a huge slice of luck to get one, then.

Although they say you should never be told your chances, we also want everyone to have expectations in check for tomorrow. Right now, we have just under 54k on the “waitlist”.We’re horrified at that number. We’re rooting for each and every one of you.January 8, 2021

The website’s product listing notes that the DualSense controller has to be completely disassembled during the conversion process, which means the standard hardware warranty provided by Sony is void, so bear that in mind. The console, however, will still be covered as only the side plates are being customized.

Of course, this fetching retro style design doesn’t come cheap. You’ll have to pay a premium of $99 for the DualSense controller (usually $69) and $649 for the PS5 console (usually $499). When you compare it to a garish gold PS5 that will set you back over $10,000, it almost seems reasonable.

It goes without saying that if you order the PS5 or DualSense controller from SUP3R5 you do so at your own risk. Sony might also wield the ban hammer before the console is actually shipped, as it already shut down a retailer that was selling custom PS5 faceplates last year. However, it hasn’t taken any action as of yet.

If you’re still searching for a standard PS5, we’re helping you find where to buy PS5 by checking all the major retailers for any new stock updates.