The Galaxy Note20’s One UI 3.0 update is rolling out globally Samsung’s been making some good headway to keep up with its original Android 11 rollout schedule. Its current flagship lines have already received the One UI 3.0 update on AT&T and Verizon, although T-Mobile’s S20 hit a roadblock last week resulting in a halted rollout. However, T-Mobile has still seemingly gone ahead with the Note20’s update as many users have already started receiving the Android 11-based One UI 3.0 experience on their 2020 Note flagships.

A bunch of people took to Twitter to report that their Note20 series phones on T-Mobile started receiving the stable Android 11 update overnight. As you’d expect, the update packs all the goodies that both One UI 3.0 and Android 11 bring to the table, along with the latest December security patch. While these user-reported screenshots should be evidence enough to confirm the release, T-Mobile’s website is yet to reflect this major version update on the devices’ support pages. 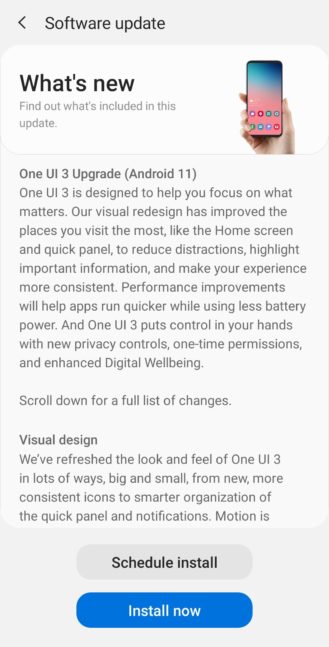 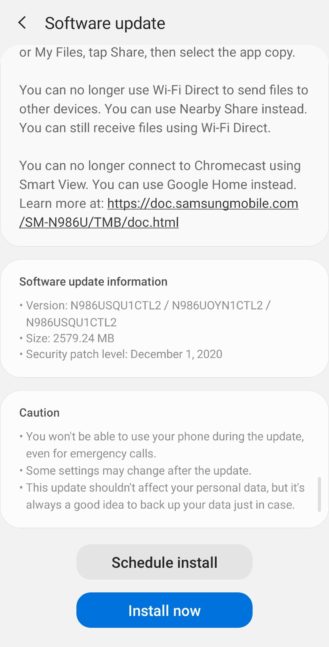 For both the Note20 and Note20 Ultra, the update file weighs around 2.5GB, so make sure that you’re connected to a Wi-Fi network when you excitedly hit the download button. If the update notification still hasn’t hit your unit, you’ll have to wait a bit for this staged release to reach you. You can always check for the latest updates by heading to Settings > System updates > Check for system updates.

Following in T-Mobile’s footsteps, Verizon released its Android 11 update for Samsung’s 2020 Note line over the weekend. Both the Note20 Ultra and Note20 on Verizon should get a software experience very close to what T-Mobile users got, while the December security patches are included, too. In addition to that, a Twitter user also got the update on their unlocked Note20 Ultra unit, so it looks like Samsung is also rolling out Android 11 to non-carrier-specific models right in time for Christmas.

Following the US rollout, Samsung has pushed the update to Exynos Note20 models globally. So far, the update has been spotted in most of Europe, India, UAE, Malaysia, India, Kenya, and New Zealand.

Seeing the update distributed this quickly is a welcome surprise, considering Samsung’s initial predictions had the Note20 family pegged for January. Perhaps we’ll see other Galaxy devices updated ahead of schedule, too — only time will tell.