How ‘gravitational waves’ will change astronomy as we know it 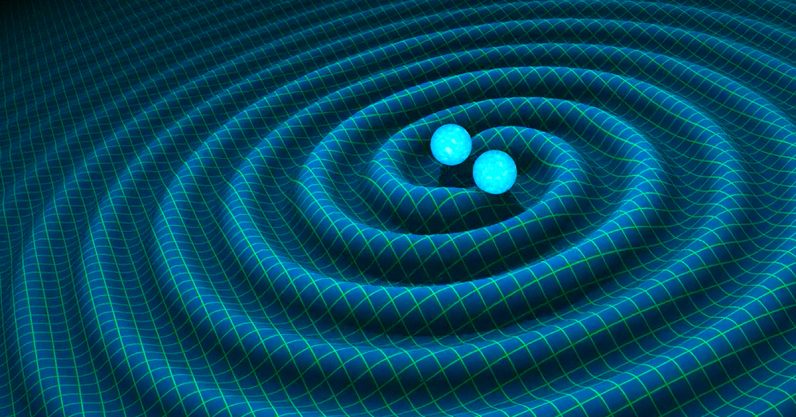 Supermassive objects such as black holes and neutron stars warp spacetime around them, and interactions between these bodies can result in the formation of gravitational waves, similar to ripples in a pond. However, these waves, postulated more than 100 years ago, cannot be seen directly like light or radio waves.

Now, a new study by the North American Nanohertz Observatory for Gravitational Waves (NANOGrav) Physics Frontiers Center (PFC) has detected a low-frequency signal that might be gravitational waves.

“We can’t yet say with confidence that what we’re seeing is gravitational waves, but if it is, the “signal” makes a lot of sense given what we think we know about supermassive black holes. This was always how this was going to play out… enticing hints of a signal before we would be able to definitively claim a detection. We’re on the right track to make that definitive assessment in just a couple of years,” Dustin Madison, a postdoctoral researcher at West Virginia University (WVU).

Perfect timing — pulsars are like a celestial Ringo Starr

When astronomy first began, humans only had their eyes to study the heavens. At the start of the 17th Century, optical telescopes were invented, and Galileo made the first systemic views of the sky. Around 350 years later, radio astronomy was developed. Then, the first astronomical telescopes reached orbit, allowing astronomers to see wavelengths of light blocked by the atmosphere of Earth.

Gravitational waves, first predicted by Albert Einstein in 1916, are similar to ripples formed in water when a rock skips across the surface. The movement of black holes and neutron stars are thought to create gravitational waves that propagate through the Universe. These waves could alter the timing of electromagnetic waves from pulsars, as they are seen by astronomers on Earth.

[Read: How much does it cost to buy, own, and run an EV? It’s not as much as you think]

The first direct evidence for gravitational waves was seen in 1974, in a binary pair of pulsar stars, by astronomers at the Arecibo Radio Observatory. Eight years of observations showed the two pulsars coming closer to each other over time, precisely as Einstein had predicted nearly six decades before. Since that time, radio signals from several pulsars have been studied, providing further evidence for the existence of gravitational waves. However, these observations were all indirect — measuring the effect gravitational waves have on distant celestial objects.

“All of this changed on September 14, 2015, when LIGO physically sensed the undulations in spacetime caused by gravitational waves generated by two colliding black holes 1.3 billion light-years away. LIGO’s discovery will go down in history as one of humanity’s greatest scientific achievements,” The LIGO team reports.

In the video below, a visualization of a millisecond pulsar, surrounded by an accretion disk of gas and dust. (Video credit: NASA)

This detector — located in Washington state and Louisiana — is able to measure tiny changes on Earth caused by interactions with gravitational waves. As gravitational waves interact with our planet, the result is slight changes in the timing of regular signals from pulsars.

“This signal is incredibly enticing. It could be that our orchestra is tuning up, hinting that we’re about to hear the grand symphony of waves from supermassive black holes that we expect pervades the Universe… If this signal is indeed gravitational waves, future study will offer unique insights into how the biggest black holes and galaxies in our universe form and evolve,” Sarah Burke-Spolaor, professor at the Physics and Astronomy Department at WVU, states.

The NANOGrav team examines timing of pulsars around the Cosmos — a pulsar timing array — searching for tiny variations that signal the presence of gravitational waves.

“Einstein had looked at the numbers and dimensions that went into his equations for gravitational waves and said, essentially, ‘This is so tiny that it will never have any influence on anything, and nobody can measure it.’ And when you think about the times and the technology in 1916, he was probably right.” — Rainer Weiss

Millisecond pulsars rotate hundreds of times per second. However, not all pulsars are suitable for the study of these elusive ripples in spacetime. Of the 47 millisecond pulsars considered by the team, 45 had at least three years of timing data, allowing researchers a large enough of a dataset to include in the study.

Individual pulsars did not contain enough information to reach meaningful conclusions, but the 45 pulsars together provided a pool of data large enough to show signs of gravitational waves. However, confirmation of this finding will require more data from additional pulsars recorded over a longer period of time. The recent loss of the Arecibo Radio Telescope will require NANOGrav researchers to gather data from additional observatories around the globe.

The team was able to eliminate other possible causes of the timing variations seen by astronomers, including contributions from objects in our solar system or errors in data collection. The team is currently developing computer simulations, designed to test whether such signals come from any source other than elusive gravitational waves.

This article was originally published on The Cosmic Companion by James Maynard, founder and publisher of The Cosmic Companion. He is a New England native turned desert rat in Tucson, where he lives with his lovely wife, Nicole, and Max the Cat. You can read this original piece here.

Astronomy News with The Cosmic Companion is also available as a weekly podcast, carried on all major podcast providers. Tune in every Tuesday for updates on the latest astronomy news, and interviews with astronomers and other researchers working to uncover the nature of the Universe.